It’s 6:00 a.m. on a weekday. The streets of Hillsdale are quiet, and there are no signs of life across campus. But in the basement of the Roche Sports Complex, there is a bustle of activity. From corner to corner of the weight room, athletes are teamed up in pairs, lifting weights and pushing through the grind of a morning workout. The sound of loud music is permeated by shouts of instruction from strength and conditioning coach Patrick Gifford as well as shouts of encouragement from teammates. Most would rather still be sleeping, but all are committed to the common goal of pursuing the title. And it is that same competitive spirit found on the court, diamond, or turf that drives Hillsdale student-athletes to strive for greatness in the classroom.

Scandals have rocked numerous universities for the poor academic performances of their athletes. University of North Carolina faced significant criticism between 2011 and 2017 for its low academic standards for athletes. Institutions have been thought to offer watered-down courses for star athletes, leaving them with diplomas bearing less weight and significance. At Hillsdale College, student-athletes truly pursue both athletic and academic excellence. Nate Neveau plays point guard and is an academic All-American. Named a captain in his redshirt sophomore year, Neveau explained what drives him to perform well academically.

“Success has not necessarily been a pursuit; rather it is a byproduct. In athletics I am committed to my team and teammate. As a result of this commitment and corresponding effort, some successes have been enjoyed. In the classroom, I have really grown in a love for knowledge. As I follow the desire to know, the ‘success’ results. In both cases, personal success is not my goal.”

The GPAs of student-athletes are often either exponentially outpaced by the regular student body or inflated thanks to “gimme” courses with little difficulty. With schedules jam packed with workouts, film sessions, and practices, it is quite common for many student-athletes to not graduate. Yet many of Hillsdale’s student-athletes are honored for academic excellence. Sydney San Juan, who plays catcher for the Chargers softball team, is among them and explained why she values the life of an athlete and academic.

“Academics are important to me for two reasons: I am not going to be a softball player forever. When I graduate, if all I’ve taken away from college is how to hit a riseball, I’m in trouble. And second, academics constitute another way in which I can honor God. Handling failures with grace, I can point to God. Being successful without pride, I can make Him known. Overall, softball is what got me to and through college, but academics accompanied with the grace of God will ultimately guide me through the years beyond.”

While most seasons last between three and five months, Hillsdale College athletes train year round and work together months in advance of the first game to deliver on the field. Every year, the football and volleyball teams arrive on campus several weeks before the start of the school year to prepare for the season. While students soak in the last few weeks of summer, student-athletes train with two-a-day practices in the humidity of August. Over Christmas break, the basketball teams take only a five-day break before returning to continue their mission of winning the GMAC championship. And in spring, the baseball and softball teams sacrifice the joys of a spring break. Being a student-athlete demands blood, sweat, and tears. But it is a price Hillsdale students pay and a responsibility they choose.

Hall of Fame baseball star Bob Fellar once said, “Every day is a new opportunity. You can build on yesterday’s success or put its failures behind and start over again.”

And so, as the sun dawns upon a weight room early morning, Hillsdale student-athletes recommit themselves to striving for greatness on the field of competition and pursuing the good in the classroom. 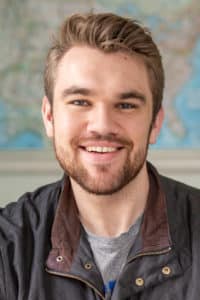 Matthew Fisher is a junior with a major in political science and a minor in journalism. He writes for The Collegian, plays on the College’s basketball team, and is involved in athlete ministries. After college Fisher plans to pursue a career in broadcast journalism.