The Art of the House Show

The house show, a mysterious creature, can be difficult to find. On a given weekend night, Hillsdale College might have one house show, if you happen to be so lucky. The land of off-campus housing is your best bet to find such a thing. And when you stumble upon a house show in the basement, in the living room, or on the patio of an off-campus abode, it is a joyous sight to behold. Some of the best college memories should involve celebrating with your friends, whether the end of a hard school week or just the community at Hillsdale.

So what does the house show look like? The house show at Hillsdale has become synonymous with thematic living room decor, confused freshmen venturing unknowingly into the mosh pit at the front, the overlap of campus’s many demographics, and the mad scramble for the auxiliary cord after the set is over. Well, perhaps that’s overly romantic. But let’s say that you, the reader, want to set up a house show of your own during your time at Hillsdale. Am I an expert on the subject? You can make that judgment after you set up a house show of your own following my basic precepts. There is both a formula and a chaos required to set up a show. A paradox of planning and unplanning. Here are some core features.

Setting a theme for the house show provides some direction to the decorating of the house. Whether it be Emo Night, Fish Party, Wombstock (a music festival at the Womb, an off-campus house), or just a Christmas party, a well-defined theme lets the party goers know what they’re getting into upon arrival (and helps them dress accordingly). Once the theme is set, and the space is available, all that is left is the choice of bands.

There are a number of student bands across campus who play a variety of music. Some bands will delve into any genre, while others stick with a certain sound. The Chads, for instance, are a Chats cover band, and solely play Australian punk. Art Morgan and the Rum Runners, The Boondocks Boys, or the Sad dads., will play anything from the 1975 to Radiator Hospital to Thin Lizzy. The band, or bands, will set the tone for the atmosphere and crowd you want at the house. Sometimes, however, it simply depends on which band is available for the weekend. The more bands, the more varied the students in attendance will be, from the Greeks to the off-campus crowd to the dormitory lifers. Keep in mind, however, that the more bands, the more necessary preparation work. Trying to find the Marginal Returns on the number of bands compared to the amount of fun is a difficult equilibrium to find. And also not a real thing.

The Day of the Event

On the day of the event, spreading the news is crucial. While going between classes, at lunch, or in the student union, the great American tradition of word-of-mouth marketing needs to occur. As you pass by your friend on the way to your second class of the day, three words must leave your mouth: “[Insert house name] at [insert start time].” For example, “Jungle at 9:30.” A further reminder on Facebook or Instagram might help, but the great house show hosts only require the buzz of Hillsdale College’s campus in order to get their message across.

Set up the equipment an hour or so before, and try to get the bands there to do a quick sound check. There is nothing worse than the lead singer falling prey to the too loud sounds of the over-excited rhythm guitarist.

The event itself is always a wonderful experience. Picture this: tens, I repeat, tens of people are squished into the small living area, a room as congested as a Hillsdale student’s nose in February. Their attention is focused on the student band, who have stationed themselves in front of the windows. With no furniture in sight, the band and their peers, although cramped, have enough space to dance, jump, and even (for some singers) perform their best Morissey impression. The show is so organic, so genuinely wholesome and unfabricated, that joy necessarily permeates the room. When you’re standing next to a stranger (hard to come by at Hillsdale), a bond is immediately formed as you scream the words to “Say it Ain’t So” quite ferociously at each other. And there is no greater feeling than making eye contact across the crowded room with a friend who has just arrived. Like Argos welcoming Odysseus home, you jump with excitement, while still dancing to the same song. Multitasking never felt so good.

The house show exists for students to learn the gifts of hospitality but also create a space of wholesome fun in which talents are appreciated and memories are made. I encourage you to both participate and host a house show during your time here at Hillsdale. It will be a memory you cherish for years to come. 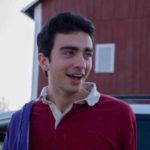 Aidan Cyrus , ’22 studies philosophy and classical education. A citizen of Vienna, Virginia, he spends most of his time writing for The Collegian, kicking the ole soccer ball around, and lamenting the loss of McDonald’s all-day breakfast. His band, the Sad dads., is the second-best indie sadcore dad-rock band in Hillsdale County.