A Conversation with Dr. Matthew Doggett

For college students struggling through that extensive research paper, Dr. Matthew Doggett has some news:

“Debaters tend to be the best researchers on campus,” says Doggett, assistant professor of speech and head of the Hillsdale College Debate Team. “It helps your critical thinking skills, and it helps you craft arguments that are evidence-based.”

Even at a school as small as Hillsdale, the debate team competes seriously. It travels to a number of national events, going toe-to-toe with some of the best teams in the country. The team has found success across a variety of different debate formats but focuses on two: the Lincoln-Douglas format and National Parliamentary Debate Association format.

In the Lincoln-Douglas format, debates are individual, and the topic remains the same through the entire competition.

Dr. Doggett says the preparation portion of the Lincoln-Douglas format is particularly beneficial because students prepare the evidence and create the speech positions.

“It lets students see into the world of a policy maker and some of the criteria they have to go through when they are crafting their policies,” he says.

Unlike the Lincoln-Douglas format, parliamentary debates are between two sets of partners and are a bit more complicated.

“You get a new topic every single round,” Dr. Doggett says. “One round you will affirm a topic, but the next round it reverses and you negate the resolution.” In addition to complexity, the twenty-minute preparation time limit makes this format much more fast-paced. According to Dr. Doggett, the short amount of preparation time helps teach students critical thinking.

“It forces you to think on your feet. It rewards students who have a broad base of common knowledge, so usually Hillsdale students do well in that event,” Dr. Doggett says.

Alongside these two main debating formats, the team also competes in the national tournament every other year.

“If you can name a debate format, we attempt to do it,” Doggett says about the tournament. “There is public forum, there is single-person parliamentary, there is congress, there is discussion, there is world…anything you can think of is at that event.”

At this event, the students on the debate team have a chance to apply the skills they learn from Lincoln-Douglas and NPDA to other formats of debate. Dr. Doggett says Hillsdale usually competes in as many events as possible with decent success.

This success is well documented in the designated debate lounge in the Knorr Student Center.  The room is adorned with ribbons and trophies from years past. These awards illustrate the pride that the team brings to Hillsdale and  continued success in competition. 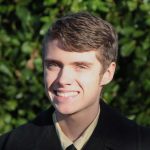 James Millius,  ’20,  plans to double major in Economics and Philosophy, and is from Beaverton, Oregon. He’s passionate about music, literature, and politics. He is a member of Delta Tau Delta, and is on the executive board of Hillsdale’s Young Americans for Liberty. In his free time, you may find him practicing guitar or reading a book.