Philosophy, the University, and Hillsdale College

Several years ago Hillsdale College modified its already substantial core curriculum to require students to take a course entitled The Western Philosophical Tradition. Why did it do so? This question takes us to a deeper set of questions: What is philosophy, and what role does it play in a college or university education?

Put most simply, philosophy is the pursuit of wisdom. This is the reason why, although philosophy can get along without the university, the university cannot do very well without philosophy. Both of these claims are denied by most American universities today, if not in speech at least in practice.  But these claims express the consensus of a long tradition beginning with Plato and stretching to the end of the nineteenth century, when it began to be replaced by a newer German model focused on specialized research and professional training. Whatever interest in wisdom that German model might originally have had, the modern university has become a multiversity, lacking a clear unity of mission and purpose.  The discipline of philosophy (if for somewhat different reasons) has largely followed this pattern, fragmenting into specialized inquiries like the mind-body problem or isolated moral dilemmas.

Although that newer model dominates American higher education today (including most so-called liberal arts colleges), it is far from clear that it is superior to the traditional model in preparing young people for work and for life. Indeed, many have begun to question the enormous investment of time and money the modern “multiversity” model requires. They do so, not only because of the dismal job prospects of many university graduates, but also because of the larger intellectual and moral malaise that seems to have infected our cultural and political institutions as well as the university-educated elites who govern those institutions. It is a good time, then, to revisit the arguments for the traditional university, which in the face of great obstacles continues to exist in a handful of places in the United States.

There is no need to reinvent those arguments. They find their best expression in John Henry Newman’s The Idea of a University, first published in 1853. There Newman sought to delineate in “philosophical and practical terms” (rather than theological terms) “what a University is, what is its aim, what its nature, what its bearings” (IX.1). He summarizes his conclusion in the Ninth Discourse:

All branches of knowledge are, at least implicitly, the subject matter of its teaching; that these branches are not isolated and independent of one another, but form together a whole or system; that they run into each other, and complete each other, and that, in proportion to our view of them as a whole, is the exactness and trustworthiness of the knowledge which they separately convey; that the process of imparting knowledge to the intellect in this philosophical way is its true culture; that such culture is a good itself; that the knowledge which is both its instrument and result is called Liberal Knowledge; that such culture, together with the knowledge which effects it, may fitly be sought for its own sake; that it is, however, in addition, of great secular utility, as constituting the best and highest formation of the intellect for social and political life; and lastly, that, considered in a religious aspect, it concurs with Christianity a certain way, and then diverges from it; and consequently proves in the event, sometimes its serviceable ally, sometimes, from its very resemblance to it, an insidious and dangerous foe. (IX.1)

The core of Newman’s argument is contained in the original meaning of philosophy (philo-sophia), “the love of wisdom.” As love, philosophy is motivated by a felt need or desire, what Aristotle called “wonder”: “For it is owing to their wonder that men both now begin and first began to philosophize” (Metaphysics I.2). Wonder desires to know the causes of things, not for the sake of some useful purpose, but simply because such knowledge is regarded as good in itself.

But causes are nested within one another like a matryoshka doll, invariably concealing within themselves deeper, richer, and more fundamental aspects of reality. These nested dolls, with their various levels of depth, might be compared to the various disciplines of knowledge (physics, chemistry, biology, history, ethics, politics, etc.). It is possible and often very useful and good to devote one’s attention to the discovery and exploration of one of those levels. This is even true within philosophy, which can benefit from paying special attention to language or logic or ethics. But in doing so, one must never forget the whole of which one’s study is only a part. The traditional name for knowledge of that whole is Wisdom, and it is the proper subject matter of philosophy, which Newman, following Aristotle, calls the “science of sciences” (III.4).

The relationship between philosophy and the university should now be clear: It is precisely because philosophy is, among other things, the discipline whose subject is the intelligible relationship between the other disciplines, as well as the first causes behind the disciplines, that it is so important to a university education. Without the centripetal pressure of philosophy, each discipline tends to spin off into its own insulated and autonomous sphere. And this fragmentation in the curriculum tends to reinforce narrow divisions within the mind and in the culture more generally.

This fragmentation is harmful in two different ways. First, it harms the development of each discipline, which always rests on a partial view of reality and which therefore benefits from the possibility of correction by other disciplines.

Second, and more importantly, it is harmful to the development of persons, whose flourishing depends upon the ability to bring competing perspectives to bear on concrete judgments and decisions about reality. As Newman points out, insofar as we treat man only as “physiologists, or as moral philosophers, or as writers of economics, or of politics, or as theologians,” we miss the whole truth about man and run the serious risk of mistaken judgments based upon those incomplete views. The painful truth of this observation has been proved repeatedly in the events of our time.

If all of this is true, why is the Hillsdale College core class called The Western Philosophical Tradition instead of just “Introduction to Philosophy”? What does tradition have to do with philosophy? The question is a good one, especially as it forces us to examine an influential rationalist prejudice inherited from the Enlightenment, one which sets reason against tradition. But what would a tradition utterly cut off from reason be like? How would such traditions grow and develop, as most traditions obviously do?

Further, what would reason independent of tradition be? And on what grounds could it ever challenge tradition, once it has cut itself off from all tradition?

These are questions, not answers. But they suggest that before we presumptuously attempt to discard tradition, we recognize the extent to which tradition not only conditions and permeates our thoughts but also constitutes a way to knowledge of the whole. This recognition in turn suggests a lower, more humble, and yet more illuminating path of philosophy than the skeptical individualism one often finds in professional philosophers. It is a path of conversation and friendship, through the great tradition of philosophy. That is what we attempt to do in The Western Philosophical Tradition, where students study and discuss Wisdom through classic texts by philosophers like Plato, Aristotle, Thomas Aquinas, Rene Descartes, Immanuel Kant, and Friedrich Nietzsche. But this leads to one final point.

As Newman’s conclusion in the long passage above suggests, the philosophical quest for Wisdom inevitably becomes a search for God. Philosophy always leads to theology, and this fact is the source of both marvelous insight and considerable tension. The founding documents of Hillsdale College appeal to “intelligent piety,” suggesting that reason and faith, philosophy and theology, ultimately are not adversaries but allies. This also means that a university education requires the study of theology. It is perfectly in accord with Newman’s argument, then, that Hillsdale College students are also required to take a course in the Western theological tradition, which forms the other wing for the flight to Wisdom.

In conclusion, Hillsdale College stands for civil and religious liberty against the forces of intolerance. In defending the rightful place of philosophy in higher education against the forces of secularization, specialization, and professionalization, it also provides the kind of liberal education that makes those liberties possible, and desirable. 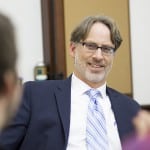 Dr. Nathan Schlueter is the Professor of Philosophy and Religion at Hillsdale College.