Reflections on the Passages Israel Trip

In January 2016, a group of about eighty Hillsdale students went on a ten-day trip to Israel with a few professors and tour guides through a group called Passages. In June a smaller group went on the same trip and enjoyed a combination of biblical and political sites all over the country.
Five of those students offer their thoughts and opinions on the Passages Israel trip, unanimously agreeing they would love to return.

Why did you decide to go to Israel?

Senior Hana Bernhardson: Sometimes I’m a little skeptical about Israel trips, but the duality of this specific trip—seeing the historical time as well as the duality with Christian religion—was something I couldn’t pass up.

Junior Jessie Kopmeyer: I wasn’t raised very religiously. I really started my faith journey at the end of high school and beginning of college, so I was really growing in my faith, and I wanted to take the next step and invest in that. I had also heard from friends that went on the trip in January that it brought the Bible to life and makes you see it in another light.

Junior Kacey Reeves: I have dreamed of going to Israel ever since I was really young. I never thought I’d be able to go, so it was great to have this opportunity through the school at such an affordable price.

Jonathan: One of the aspects was going to an area that is considered Israel by Israel but considered Jordan by every other nation. People wonder, “Why doesn’t Israel just give that land back?” It became really obvious when we got there why they can’t. You stand there looking over the country, you see several large cities, one of the nation’s biggest power plants, and you can hear the ocean. If you put one piece of artillery on the bluff where we stood, you would have access to all of Israel. They can’t allow hostile nations to have that kind of access.

Another thing that was very impactful was seeing the borders of the country. You can see where Israel ends because that’s where the green stops. Israel itself is cultivated, and then all the sudden there’s brown, dusty lands, and that’s where Israel is no longer caring for the land.

Hana: It’s very surreal because you are very much in a very modern country, but you’re standing in the place where so much ancient history happened. This is where Jonah said, “No, God, I’m not going to go. I’m going to go this way and not to Babylon.” As a kid you hear and understand those stories, but as a visual learner, to be at that place and actually see it was super impactful.

Senior Alexis Garcia: I thought they did a really neat job of combining both modern-day Israel and the religious aspects and the different biblical sites.

Kacey: The country is on the smaller side, so I liked that we were able to go from corner to corner. We were at the border of Lebanon, the border of Syria, and everything in between. A lot of times you travel to a place and don’t get to see much, but when we went to Israel, we were able to see the entire thing.

Was there anything you didn’t like about the trip?

Hana: It wasn’t long enough. The trip was super packed, and every day you’d be going from nine in the morning and finishing up a lecture at eight at night. I think you see a lot of things, and that’s fantastic, but I think another element of any overseas trip is seeing the nightlife and the people. I think even if the trip was a day longer, you would have a little longer during the evenings to go out and be in the markets.

Alexis: It was pretty fast paced, which was nice because we got to see so much, but also a little tiring with the jet lag.

Jessie: Going in I was kind of worried about the lectures being tedious and sitting through all these speakers. We had one or two lectures a day. But they were amazing.

Kacey: I was a little worried about going with such an organization because I don’t really like the structure of traveling and just riding a bus. But I think the organization we went with did a really good job with that. It didn’t just feel like we were siphoning off their resources or being typical tourists.

What did you learn?

Jonathan: One of the more significant things was just the degree to which Israel is susceptible to attack from the outside, the number of rockets that are aimed at its civilian population every year, and the lengths to which the government and the people have to go in order to avoid that. They have bomb shelters on their basketball courts. Their kindergarten is protected by very thick concrete ceiling so if the rocket lands it’s not likely to hurt the children. It is really quite sobering.

Hana: I think the biggest thing was the view of Israelis and the Palestinians within the country. In the media there’s a lot about the Palestinians advocating their children and how the Israelis are bad. But when we were back on that border, we were talking with a man—a father with children—and he talked about how you have nine seconds to hide and get away if there’s a rocket or a bomb. That’s a very real thing, and that’s impacting the psyche of [his] children for sure. He would tell his son at night that there are good people on this side and good people on that side. Not everyone is evil on either side. To see that humanity, to be in that moment and talk with a dad whose six-year-old son talks about a dream of guns and terrorists breaking into their town, a very vivid dream with a very real threat, that was probably the biggest thing I gained.

Jessie: I went in thinking I knew the basics of the Israeli-Palestinian conflict, but going in makes you realize how little you know as well as what’s going on in the world today and the basis of that conflict. Because you meet so many amazing people, it becomes much more real.

Kacey: One of the biggest things I learned was probably just seeing, like, the formation of Israel didn’t really happen by chance; it happened by people fighting for it and sacrificing their lives and their livelihoods to secure it.

What would you recommend to Hillsdale students who may be interested in going in the future?

Hana: Get ready to be exhausted, but take advantage of the little opportunities. One of the coolest opportunities we had was befriending our security guard. Being able to meet and talk to this man who was twenty-two or twenty-three—barely older than us, but had already served in the army—befriending him and getting to hear his story was fantastic. It took a little bit of work, and it meant a little less sleep, but it was worth every second.

Alexis: Just try to soak it all in. It’s kind of hard because they’re throwing so much stuff at you, but it kind of sinks in. If I went back, I might keep a journal to try to remember all the different places…just to kind of jot down what I saw at each place.

Jessie: If you’re even just kind of considering applying, apply. I think really, no matter what, you can learn something, but whatever you imagine it will be is different. I went in with low expectations, and it far exceeded them.

Kacey: This isn’t an opportunity that comes around a lot, so if you have the chance, take it. I had my doubts about going. I didn’t know if it would be safe or well-structured, but I really enjoyed it. I tried not to take a lot of pictures and to live in the moment. If I went back, I would probably just try to do the same approach.

Jonathan: Israel is surprisingly like a mix between U.S. and what I think of as Europe in many ways. One of the things that was a bit of a shock, however, was the degree to which the Sabbath was observed in the areas we were out. The hotel really shuts down, and there isn’t much going on after Sabbath begins on Friday.

Alexis: Everyone is always talking about the media and how the media portrays things biased, but that really can be true, especially how Israel is portrayed in the media.  Americans don’t really question what they’re told, but Israelis don’t necessarily believe either side. Things can be skewed on both sides.

Jessie: The trip gave me a greater appreciation for what we have in America because you don’t think about feeling safe all the time as a luxury, but it so is, and we take that for granted. I’d never really been to the Middle East, so I didn’t know what it would be like. The people over there are really great and really nice, but it still is a very different style of living. Learning about all the kids that go into military right out of high school shows such a dedication to their family and their country.

Kacey: I loved all the people I met. Their lives are very intentional because it’s a dangerous place and you never know what’s going to happen. I actually felt very at home in Israel. Traveling before, you can kind of tell that the people are just putting up with you because you’re an American, and they’ll put up with you for your money. But in Israel, everyone is genuinely excited to see us, and they’re happy that we’re American. 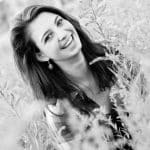