How the Liberal Arts Relate to Us

When my little brother, a senior in high school, asked what he ought to expect from his first week on a college campus, I told him to get ready to answer the same questions over and over again: “What’s your name?” “Where are you from?” “How did you end up here?”

They’re simple questions, and most can get into a routine answering them. “I’m so and so from North wherever,” or what have you. The point is, the answers to the questions aren’t much considered. They’re icebreakers. Chances are the asker won’t even remember them anyways, and you’ll have to remind him the next time you end up at the same table in the cafeteria.

However, despite their simplicity, we shouldn’t overlook these questions. They give us context for ourselves, and without their examination we struggle to know who we are. During my time at Hillsdale, I’ve realized more and more that by studying the liberal arts, I am able to wrestle with these questions on a deeper level.

For instance, to know ourselves, we must first know our roots. Unless I give people context for myself, I’m a blank slate from their perspective. I could tell someone that I hate mustard, but unless I told them it was because my kid brother once dared me to eat a tablespoon of it and I got sick, they would just think it was a quirk of my personality.

But there are reasons I am the way I am. Previous experiences and decisions have shaped my tastes, not only on a microcosmic scale but a macrocosmic scale too. I grew up in Washington because of decisions that my parents made, and they moved there because of their histories and so on. We are shaped by the decisions and values of those people who preceded us.

In the same vein, the liberal arts give us context for our intellectual heritage. When we read the great books and study the meditations of Augustine and Aristotle, we are able to see how their legacies have been passed down from generation to generation in a way that continues to define our thoughts.

By engaging in these ideas, you can decide what you think about them yourself. Now that you see where you are from, you get to evaluate where you are.

It’s the same concept as getting settled in on campus. Once you become familiar with Hillsdale and its culture, you get to have some opinions and figure out what you think about the place yourself.  It was here before you and will continue past you. But for now it’s yours. What do you think about the campus they left you?

This is the evaluation process of the education, wherein you answer the “Who am I?” question. Now that you know where you’re from and the kinds of people who shaped you, it’s time to find out what “you” is as a unique member of the human race.

Now that you understand where you’re from and who you are, you get to face the question of where you’re going. Picture this: You’re on campus; it’s November; and you’re getting excited for Thanksgiving. Everyone you know is making plans to go home to their parents or stay with their Aunt Tabatha in Timbuktu. Three times in the same week you’ll get the question, “Where are you going?” And you’ll have to answer the question for yourself.

So where are you going? The decision is yours. It’s just Thanksgiving now, but wait until graduation; the question will feel a lot less like casual party small talk.

A liberal arts education helps you answer this question by forcing you to evaluate your own perspective of your current situation. And once you have considered these questions, you are ready to go out and decide for yourself how to shape your culture. There is a whole new class coming in after you. What are you going to leave them? Examine your own ideas. Put them in context of the decisions of those who came before you. See how they shaped you. Contribute.

I was reading Tolkien’s Return of the King the other night before bed, and I came upon a scene wherein the Hobbits are marveling over their experiences and how the scope of their little lives has been greatly expanded by their interactions with men and elves and dwarves. As these two simple, wholesome folks muse on their lives, their conversation resembles that of students whose minds have been opened to the reality of the intellectual world:

“Dear me! We Tooks and Brandybucks, we can’t live long on the heights!”

“No,” said Merry. “I can’t. Not yet, at any rate. But at least, Pippin, we can see them, and honour them. […] You must start somewhere and have some roots, and the soil of the Shire is deep. Still, there are things deeper and higher; and not a gaffer could tend his garden in what he calls peace but for them, whether he knows about them or not. I am glad that I know about them, a little.”

This passage paints a beautiful picture of the liberal arts. There are things beyond your little scope, things upon which your whole peace and person depend. And maybe you weren’t made to battle them your whole life. Maybe you will want to go back to your little corner of the world and enjoy your gardens when all this “higher education” is over. But it’s good to know the things that shape your world, so that when threats to your peace do arise, you’ll know who you are and what you’re about, and most importantly, you’ll be able to defend it. 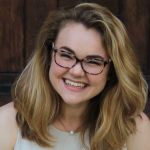 Molly Kate Andrews grew up in Eastern Washington State with her parents, five siblings, and a gentle dog named Grendel. A class of ’19 English major, Molly Kate plans to return to her mountains and her family once she has finished her degree.