While many of her peers were out relaxing on a beach or traveling abroad, Genevieve Chiara, ’18, spent her summer researching Staphylococcus aureus with hopes of understanding how to prevent its spread in hospitals.

After studying microbiology during the school year, Genevieve knew that she wanted her research to focus on advanced cell biology and thus designed her project to study the possible effects of glucose on the biofilm growth of staph.

“When staph grows as a biofilm, it means that the bacterial cells are not individual, but rather adhered together. When the cells grow this way, the staph is more dangerous to its host,” Genevieve explained.

The technique, which involves inserting bacteriophages onto the staph, allowed Genevieve to obtain the DNA that had an affinity for the staph. Once she secured the DNA, she was able to use software programs like Geneious and BLAST to convert it into amino acid sequences.

While Genevieve is still analyzing her data, she has begun to find both virulent proteins and adhesive proteins. She hypothesizes that glucose affects the biofilm’s ability to adhere to the glass disc, but does not affect the cell-to-cell adhesion.

Through her experience this summer, Genevieve learned that the research process isn’t always smooth. After some minor setbacks in the first two weeks, she had to experiment with different procedures—some of which didn’t get tested until her last week.

“Not everything went as planned, but that’s just how science is. You have to try and fail and try again,” Genevieve said.

Despite the arduous process of research, Genevieve enjoyed her time in the lab, as she recognizes the importance of in-depth research on staph.

“Biofilms often grow in materials such as catheters and IVs, and can be spread through contact onto the skin. Developing more knowledge about how it grows and works will be useful in killing the organism and preventing infections,” Genevieve said.

As many institutions only grant research opportunities to graduate students or Ph.D. candidates, Genevieve is grateful for the aid Hillsdale granted her through the LAUREATES program and the one-on-one experience she received from her program advisor, Dr. Steiner.

“He was definitely a huge help throughout the six weeks of research, and I wouldn’t have been able to do it without him,” Genevieve said. 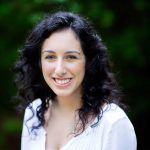 Kayla Mykeloff,‘19, is a politics major and business minor from Frisco, TX, and is a member of Pi Beta Phi. When she isn’t studying or working for the marketing department as a web tech, you can find her eating gummy worms or Pi Phi Nachos and binge watching Criminal Minds or House of Cards.