A Spotlight on Dr. Hart

Dr. Darryl Hart acts as a lucid editor in his Western Heritage course, guiding students through three thousand years of recorded tradition. Dr. Hart leads the discussion, which is animated by the thoughts and debates of the students, asking penetrating questions.

“We have inherited a vast body of thought and history from our ancestors, and it’s great to be able to work through and analyze that,” he says.

Dr. Hart came to Hillsdale from Philadelphia and admittedly wondered about the small town with “no Macaroni Grill, Starbucks, or Restoration Hardware.” He has since come to appreciate Hillsdale.

Perhaps much of this appreciation comes from the academic culture at the college.

“My colleagues in history and I are active in talking about and unpacking what we teach,” he says. Dr. Hart focuses on what he describes as a “blend of intellectual and religious history” not only in class, but also in the twenty-three books he has written, edited, or co-authored. An elder in the Orthodox Presbyterian Church, Dr. Hart has written extensively on American Protestantism, the role of religion in politics, and the biographies of important American theologians.

“History,” he says, “is all about what you have to delete to talk about it.”

In his Western and American Heritage classes, Dr. Hart has experimented with talking about history as a thematic narrative, using texts in class to reference what various groups in Western civilization are perceived as “good society” or as living the “good life.” And the controversial is not cut out in his story.

Take, for example, a book he has written on theologian J. Gresham Machen and another he is working on about writer and journalist H.L. Mencken. Both thinkers held complex and often misunderstood ideas about the world, which have generated airs of controversy around them. Dr. Hart enjoys discussing them and their unconventionality. Rather than polarizing the religious Machen and the staunch atheist Mencken, he sees a connection between them that rejects modernist theology and fundamentalism.

“Iconoclasm,” he says, “is a difficult subject to talk about. I don’t like boosterism, or cheerleading for figures in history.” Challenging the presumptions of the past is an integral role in the work of the liberal arts student. “We can’t just be complacent with the interpretation of what we’ve been taught because someone important says that’s the way it is. To some extent, I enjoy challenging that as often as I can.”

Dr. Hart’s iconoclasm extends to his work on the contemporary, including the role of religion in politics. In addition to arguing for the continued importance of Machen in theology, Dr. Hart has continued discussing religious issues, both as an editor for the Nicotine Theological Journal and at Old Life: Reformed Faith and Practice, a blog that has been critical of modern fundamentalist thinking in the public sphere. His 2011 book From Billy Graham to Sarah Palin: Evangelicals and the Betrayal of American Conservatism, which Michael Cromartie described as an “important challenge to evangelical leaders, pastors, and activists,” criticizes the assumptions of current evangelical political posturing. Deconstructing Evangelicalism, published in 2005, is an examination of the term itself, which Hart ultimately rejects as near irrelevant.

As much as Dr. Hart delights in challenging common conceptions of religion and history, he still feels a strong connection to the work of the past.

“I like saying something,” he says, “especially if I can introduce new thinking to a topic.” 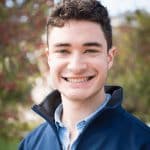 Finn Cleary, ‘18, is from the cultural hub of America, Columbus, Ohio. He plans on majoring in history and working in the public policy field.