Dr. Joseph Garnjobst on Grades, Learning, and Being a Mighty Warrior

“Quizzes and exams become short-term goals that make people do things that are irrational in the long-term,” Dr. Garnjobst says. “Students perform better, thirty percent better, when their mind is positively oriented instead of negative, neutral, or stressed.”

When students check the awesome box, they make a conscience choice to switch their paradigms and be positive—be awesome.

Dr. Garnjobst emphasizes that the outcome of quizzes and exams is not as important as actively choosing the mighty warrior attitude of waking up every day and honestly giving your best effort. Mighty warriors who pursue the challenge wholeheartedly understand that the grade does not reflect who they are as students.

The classics professor had his first mighty-warrior moment in graduate school at the University of Santa Barbara, where he realized that grades did not determine the quality of his performance.

“Grades weren’t meaningful to me, and it was very liberating, because what it meant was that I could concentrate on the material itself and do my best with the material and not have to worry about what my grade point was going to be. If I was out there honestly doing my absolute best, and that turned out to be a B, there was nothing more I could do about the whole thing.”

Dr. Garnjobst believes the worst thing a student can ask is, “Will this be on the exam?” because it over-privileges the tested material. This question reflects one of the two goals of performance in language classes: passing the test and learning to read and speak the language well. Senior Meg Prom learned this same lesson the hard way when she looked at her performance on her first quiz.

“My pivotal moment in Dr. Garnjobst’s class was when I got my first quiz back or something. I’m pretty sure it was like a D…”

Dr. Garnjobst interrupts: “That can’t possibly be true, because I never put grades on things.”

“—Well, true. But, in my head, I had calculated that I had literally only gotten two correct.”

“It was my fault,” Meg laughs. She explains that she had begun college motivated to learn for learning’s sake, but by the time she made it to her Latin class, she had adopted a grade-centric attitude.

“I felt like even the challenges being presented at the school weren’t enough. Even my major and minor weren’t doing it. I just wanted something that I really wanted to do that I had never done before; I just wanted to test my limits.”

“I felt like I had failed.” She went to visit Dr. Garnjobst in his office, which is adorned with large, shiny trophies, performance mantras in Greek, and the lady Fortitude. She said she came in contact with her previous, goal-driven self, realizing that she enrolled in Latin purely for the challenge since it was not a language or major or minor requirement.

“I went from seeing a challenge as a certain number to seeing it as a more organic piece of knowledge that I was going to be working with the rest of my life.”

After her first office hours, Meg realized that she, like many others at Hillsdale, had unconsciously begun to emphasize exhibiting strength in the challenge, not the challenge itself.

“‘Strength rejoices in the challenge’ is the motto of this school. I think too often we think the challenge is just the strength, which is just turning it around, making it cliché. But it’s true: we think we have to be immediately strong at something through an A on a test or a quiz, and if we’re not, we’re failing it—that we haven’t really engaged with the challenge. Dr. Garnjobst’s class taught me that the challenge is just doing it.”

Because Dr. Garnjobst treats the classic languages as challenges to be taken up for their own sake, he treats his classes like sports, his students like team members. He repeats the motivating mantras, focuses on positive engagement, and encourages the students to create a support system—complete with Facebook pages.

Ten years from now, Meg predicts that she will design logos for her boss with the same “mighty warrior” attitude she adopted when she began learning Latin nouns. 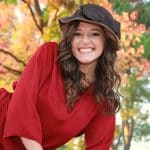