When Maria Servold, assistant director of the Dow Journalism Program and Hillsdale ’10 alumna, leaves her two daughters for work, her oldest likes to pretend to go with her.

“She’ll put her backpack and shoes on and say, ‘Bye, bye, work,’ and stand at the window and wave,” Mrs. Servold said of two-and-a-half-year-old Evelyn. “It’s really cute that she’ll imitate it, and she never seems sad that I’m leaving.”

For that, Mrs. Servold said she is grateful, especially when she returns home to see the smile on six-month-old Elizabeth’s face. Even as a student at Hillsdale, she knew she wanted to be a mom. But she also wanted to have a career.

“You want to do both full time, but it’s just not possible,” she said. “My job has a really good balance. Hillsdale is extremely family friendly and willing to work with you one on one. And I’m really grateful for that. It’s harder than if I had just chosen one over the other, but I get fulfilled in both those ways.”

Although cuddling with her kids and helping students put out the next issue of the school newspaper, The Collegian, are two very different tasks, Mrs. Servold said that being a mom and an educator are somewhat one in the same.

“We don’t just throw information at students,” Mrs. Servold said. “We have to guide them and coach them and nurture their brains and hearts. I think it is very motherly in that way. I have my big kids, and I have my babies. And they have very different needs, though not always. Sometimes they just need a snack.”

That was the case a few years ago when Mrs. Servold was driving a group of students to a journalism convention and she passed out juice boxes. It earned her the nickname “Mom,” which is now a tradition among The Collegian staff, even though Mrs. Servold graduated just a few years before her current students.

“It makes me feel loved, that I have this good connection to the students that’s beyond just being a lecturer,” she said.

But being a mom and a professor has its challenges. Just as it can be difficult to find the time to grade papers at home, it is hard to be away from her children during the three days a week she works.

“My husband, Ryan, will send me cute pictures while I’m gone, and it’s like, ‘Oh, I’m missing it!’” Mrs. Servold said. “But knowing that I am doing what I love, and that they are seeing that Mom is working and doing something important, that makes it worth it. I like that I’m sort of setting the example for them to show that a woman can do both, that you can be the mom and the breadwinner.”

In that way, Mrs. Servold said she feels more rounded as a person, which is something she learned to focus on during her time as a student at Hillsdale through the liberal arts.

“I learned how to be a better and whole person, a full human,” Mrs. Servold said. “That, I think, definitely carries into motherhood. That carries into what I can teach my own kids. It’s the education of the person, of the soul. That’s so key to then take to the next generation whether it is as a teacher here or with my own kids.

“My grandmother used to say, ‘You give your children roots, and you give them wings.’ Some things aren’t fun: changing the twelfth diaper or making sure the toddler gets something to eat. But it’s those little things that add up to raising souls. You’re not just doing it for the sake of the thing, but you’re doing it for somebody else. You give them that foundation that keeps them grounded, but you also give them the wings to help them fly.”

While Mrs. Servold prepares to allow Evelyn flutter her wings at preschool next year, her students in the classroom have already taken flight, and she takes delight in being there for them, too.

“Their parents want to know that they’re being taken care of,” she said. “And they’ve got a little extra mom here.” 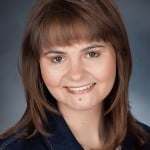