Sally Klarr, ’12, has always had a love for the beautiful—she was fascinated by jewels long before her Hillsdale education.

As a child, Sally often played with her mother’s jewelry. When she was in ninth grade, she saw a jewelry exhibition at the Museum of Natural History in Washington, D.C., where some of Elizabeth Taylor’s jewels were displayed.

“After that, I knew I wanted to work with jewelry,” Sally said.

A few years later, Sally attended Hillsdale and earned her degree in speech (now called rhetoric) after completing her senior thesis on something jewel-related. The fall after her graduation, Sally joined the Gemological Institute of America in New York City. She attended full-time from September to April, Monday through Friday, from 8:00 a.m. to 4:00 p.m.

“The full-time program was quite a shift after a pretty relaxed class schedule in college. It was a lot of geometry, physics, and chemistry, and it was a huge challenge for me! It was a hard transition and hard studies, but this had been a dream of mine for almost ten years,” Sally said.

To graduate, Sally had to pass the daunting “20 Stone Exam.” Its test-takers receive twenty unidentified stones that could be almost anything, from diamonds to plastic to semi-precious gems. Provided with a variety of tools, each prospective gemologist has to identify the stones’ names, families, possible color treatments, and more. The only way to pass is to classify all twenty stones completely correctly. Many people take the exam several times before they get the required 100 percent. Sally passed the exam on her first try.

Sally’s first jewelry job was at Christie’s in New York, where she worked as a junior specialist and cataloguer. Since then, Sally has worked with major jewelry houses such as Cartier and Tiffany, and smaller brands such as Ivanka Trump Fine Jewelry and Oscar Heyman.

“At first, my main duties at Christie’s consisted of assessing the condition of all the jewelry that was entered into the auctions,” she said. “I saw more rare and magnificent jewelry there in two years than many people do in a lifetime.”

Sally later became director of marketing and public relations at Marshall Pierce & Company, a jewelry and watch store in Chicago.

“The leap from being a technical assessor of jewels to being a business manager was quite a shift for me. I had never taken a single marketing class in college, and I had to figure out on my own the basics of ad campaigns or market plans within a budget,” Sally said.

She advised students to take advantage of their professors and classmates’ feedback and value their critiques.

“When I was learning how to do it, I had clients and business partners who needed it ASAP, and if I failed, it affected more than just a grade,” Sally said.

However, Sally found that her speech major helped her succeed in other challenges at work.

“Being a speech major, in my opinion, applies to any aspect of any business,” she said. “What business person doesn’t need to be a good public or personal communicator?”

Sally recently transitioned out of her role as marketing director at Marshall Pierce and now focuses on private sales.

“Currently I’m exploring the idea of going to grad school to get my MBA, and I’m starting my own online store with an educational and blogging component. I want to share more of my love for jewels, and sell pieces from a curated collection I’m working on,” Sally explained.

As Sally proceeds with new ventures in jewelry, speech, and marketing—the things she loves—she offers this advice: “Don’t be afraid to get into an area of business you aren’t familiar with. Whether it is within or without your industry, you will always have time to figure it out.” 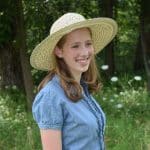