Kyle Cooper graduated in 2016 as an All-American basketball player and a competitive applicant for the Rhodes scholarship. His prowess both on the court and in the classroom led to an interesting crossroads when both employers and agents for professional overseas basketball teams began to vie for his attention.

Kyle got connected with an agent who had represented other Hillsdale basketball players, and he decided to go the basketball route and play for AB Castelló in Castellón, Spain—the country known for having the best professional basketball outside of the U.S.

“I love basketball, and it’s every kid’s dream to be a professional athlete,” Kyle said. “I felt like I was more than capable of fulfilling that dream, so I figured I should at least give it a try.”

So the same year Kyle graduated college he moved to Spain to follow his passion for the game. His favorite aspects of Spain are what you’d expect: the balmy coastal weather that never falls below forty degrees, and the wide variety of Spanish cuisine. But it wasn’t all sunbeams and tapas. The hardest part about professional basketball in Spain was the loneliness Kyle experienced as a young foreigner.

Adjusting to new teammates was only part of it. Kyle also had to adjust to a whole new style of basketball. The game in Spain is much less physical and far more crafty. Many of the players, for example, are men in their thirties who rely on intellectual plays to keep up with the younger athletes.

After a year playing basketball in Spain, Kyle decided he had tried it and had enough. He also had other things to consider, like his engagement to his college sweetheart, Kylie, and a job offer to work as an auditor for PwC, one of the big four accounting firms. Now back in the U.S., Kyle is currently studying for his last test to become a certified CPA and is enjoying the first time in his life as a non-athlete.

“I did the overseas thing for a year and still love basketball, but I was comfortable with the decision to leave on my own terms. It was a cool experience, but it wasn’t what I wanted out of life.” 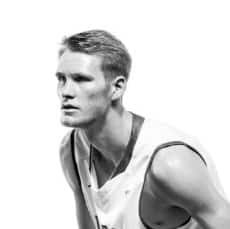