Finding Yourself: Beyond the Bubble with Pat Davenport

I recently had the chance to connect with alumnus Patrick Davenport, class of 2014, to discuss life outside the Hillsdale bubble and his experience networking. Patrick majored in finance and financial management at Hillsdale and was a member of Sigma Chi fraternity as well as president of the Interfraternity Council his junior and senior years. Patrick currently works as a Territory Manager with TECTRAN Manufacturing Inc.

BEN DIETDERICH: So, Patrick, I first have to ask: did you have a favorite professor during your time here?

PATRICK DAVENPORT: Dr. Blackstock was probably my favorite. Definitely worth taking his class. If he’s still teaching it, make sure to get in and take him.

BEN DIETDERICH: Dr. Blackstock is great. His wife, Jackie Blackstock, is as well. Sadly, they are both retiring this year. Did you have any internships during college? Did you do the WHIP program, by chance?

PATRICK DAVENPORT: No, I didn’t do WHIP, but I did take an internship between my junior and senior years, working for a Hillsdale graduate in Chicagoland. It was in the truck parts industry, which is an industry I’ve stayed in.

BEN DIETDERICH: So, your internship transitioned into a job later?

PATRICK DAVENPORT: It did, and I got some good contacts. I did some good networking during my internship.

BEN DIETDERICH: I think a lot of Hillsdale students or any college student’s dream is to be able to take that internship to the next level.

PATRICK DAVENPORT: Absolutely. My internship was a very eye-opening experience because you do get out of the bubble; you see what the world looks like.

BEN DIETDERICH: Coming out of Hillsdale, how did you manage to do a good job networking, ground yourself with people? You know it’s got to be a little hard, right? A little bit of a different climate.

PATRICK DAVENPORT: When you get your first job or internship, you’re probably in a bigger city than you went to college in, and there’s a bit of isolation in big cities. But at work, the people you see every day are the people who are easiest to network with—to win over. A lot of that has to do with being a person that people like to work with and be around. It comes back to having values and knowing what those values are—and being a good worker. People are drawn to that confidence. You don’t really understand in college what networking is. The word LinkedIn is probably in your vocabulary, but networking isn’t being LinkedIn friends with the Apple CEO. It’s having a relationship. And it can be very formal, or you could mow a lawn for someone. You might only see someone twice, but having that person have enough trust in you that they’d stick their neck out for you to get you a job, that’s what networking is about.

BEN DIETDERICH: As a student who’s come out of Hillsdale recently and been in the real world doing an internship, one of the hardest things I’ve noticed is walking that balance between networking but also not feeling like you’re just using the person, so to speak. It’s an uncomfortable situation when you’re first getting into it.

PATRICK DAVENPORT: You definitely don’t want to be utilitarian. Networking is a conscious act. It should be part of who you are, in the sense that you’re just being a good person—you’re being yourself, being friendly. That is building your network. If you’re intentionally trying to build your network, which can be okay, it’s going to come across more forced, and you’re going to feel a little ickier about it. But networking is different than clicking on someone’s LinkedIn profile. It’s your real life. It’s who you are.

BEN DIETDERICH: Why is it so important? Some people will think, I have a qualified resume. I’m coming out of Hillsdale. I can do this. I don’t need any special favors. Why is networking so important?

PATRICK DAVENPORT: I’ve done some hiring at a couple of different jobs I’ve had. I think I’ve had four, maybe five jobs in the last four years. And everybody wants smart people. They want good people. If I’m looking to hire someone, and I see that they’re from the same town as this guy—they went to the same high school—the first thing I do is ask my colleague, “Did you ever meet Ben Dietderich? What can you tell me about him?” Because you don’t want to take a flyer on somebody. It’s easy to look good on paper, but the handshake test is a lot better—to have spent some time with this person. Everybody I’ve seen get a really good job has had someone inside the company advocating for them.

BEN DIETDERICH: How about for alumni who are already out there? They’ve got their first job, maybe their second job. Should they still be concerned with networking? And if so, why?

PATRICK DAVENPORT: They should be more concerned with networking. Most of my networking really didn’t happen as an intern. It happened in the professional workforce.

The easiest person to network with is your boss. You want to be an employee who is easy to manage and does a good job and helps their boss out, because that person might move jobs in a year or two years. And you should always be able to reach out to that person who went before you. A third of the people at your first job won’t be there in two years, so win them over. Chances are they’re going to be higher on the chain at their other companies in five or ten years. Whether they’re at a competitor in the industry or in a different industry, those are people who always should be able to say, “That’s a guy I want on my team.”

BEN DIETDERICH: Any more advice for alumni out there, or current students, regarding the topic of networking?

PATRICK DAVENPORT: Another thing I see a lot of is companies interacting with other companies. There’s a lot of business-to-business going on, where you have clients coming in a lot, or you have customers you’re dealing with a lot, who are working vertically in the same industry or in a touching industry. Those people need to know that you’re competent and professional, because a lot of times, when companies have worked together a lot, the next thing you know they offer this guy the general manager job there, or the VP of something. If you impress the other companies you work with, even if your company is down or isn’t hiring, maybe they are in a spending spree and want to overpay someone to run a division.

BEN DIETDERICH: Let’s talk about your favorite part of Hillsdale. If you could say one thing that was really a big highlight, what would that be?

PATRICK DAVENPORT: Hillsdale taught me to expand my mind as a critical thinker in a way that, maybe when you’re there, you don’t realize how safe it is. There aren’t a lot of consequences for taking risks in your thought at Hillsdale, so it provides a safe environment to learn and to grow as a person in how you, for example, take up problems and solve them. It all clicked for me probably my sophomore year, when I realized what we’re trying to pull together in Western Heritage. It’s really a beautiful thing.

BEN DIETDERICH: Absolutely. When you got to Hillsdale, what did you think you were going to be doing post-college?

PATRICK DAVENPORT: I think I changed majors once a semester for my first five semesters of college. Even my senior year I was one class away from double majoring in finance and math, and I haven’t used either of those majors. It wasn’t until maybe two years out when I thought, Hey, I’ve developed some skills in the workplace. I think I can leverage them.

BEN DIETDERICH: And what about that first trucking-industry internship was it that attracted you?

PATRICK DAVENPORT: I looked at the different departments I worked with there, and I asked myself who was having the most fun for the least demanding work. I decided it was the outside sales guys. Then I made a list of similar jobs and tried to match them with my skills and what I liked. I was in the marketing department then, but I thought of how I could leverage what I was learning to get to those better departments. And the reality is that we don’t stay in these roles or at these companies as long as we think we will. You might take a job and think it’s the one you’re going to retire from, but as things change and you see other offers in other companies, you know that path changes a little bit.

BEN DIETDERICH: Is there a lesson you took away from your college experience at Hillsdale that really helped you when you got out into the real world?

PATRICK DAVENPORT: In college, I realized where my skills fell in line with some of my classmates. I was good at seeing patterns and being able to anticipate what’s going to happen next, to stay a step ahead. I saw it in the way I studied. And I realized that those skills were things I could grow in school, so that I could leverage them into a professional atmosphere and eventually get paid for them. I guess my main takeaway was figuring out who I was, what I was good at.

You can check out more in the archives and learn tips from other alumni, get to know what they did at Hillsdale and what they’re doing now. And for those of you on campus, check out Career Services at the bottom floor of the old Student Union. 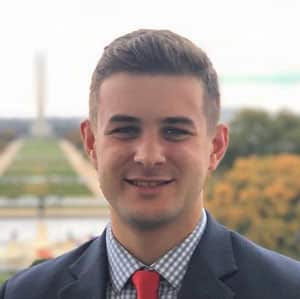