Not Your Typical Student: How Hillsdale Inspired Me

After the tour that began my acquaintance with Hillsdale College, the guide led me up to the second floor of Central Hall with a group of high-school students for our admissions interviews. As we waited, we began talking about how we had heard about Hillsdale.

One said, “My dad heard about it on Rush, and we began to look into it.”

Another said, “They recruited me for cross country, and I like the coach.”

Finally, one said, “I came here because there aren’t any liberals. This is a place for conservatives.”

A bit perplexed, I politely asked, “What is the difference between a liberal and a conservative?”

They waited for me to give the punchline, but as the silence persisted they realized I wasn’t joking.

My family is not political. We are not the typical Hillsdale family. We don’t listen to talk radio, read Imprimis, or watch Fox News. My parents read the local election pamphlet the night before the election and voted split-ticket. And though I knew nothing about politics or philosophy, I thought I knew what I wanted in a college.

Returning home from my visit to Hillsdale, I wasn’t entirely sold. I wanted to attend a real prestigious school, one that everyone had heard of, like the University of Chicago or Princeton. I wanted to study economics and become the CEO of a company. I wanted my education to help me climb the social ladder. But I kept hearing about Hillsdale. I first heard about Hillsdale College from one of my high-school English teachers, Amy Blanchette, an alumna. During my sophomore year of high school, my stepfather took a continuing education course at Hillsdale from Professor of Economics Gary Wolfram. My stepfather returned home with a signed copy of The Capitalist Manifesto and a sterling recommendation for the College and its political economy program. My mom had read about Hillsdale in Loren Pope’s book Colleges that Change Lives.

The second time I visited, it was for Scholars Weekend—a weekend just prestigious-sounding enough to stroke my ego and make me consider taking a second look at Hillsdale. I was able to attend lectures by professors about Edmund Burke and James Joyce. I met students who were engaging, witty, and intelligent. They spoke about great minds like Aristotle, Sophocles, Cicero, and John Henry Newman as if they were personal friends with whom they had enjoyed a stimulating dinner conversation the previous evening.

I knew hardly anything about these men. A great expanse of knowledge was opening in front of me. People were reading great books and having deep conversations only an hour from my hometown. A place where I could receive a true education was just a short drive away.

On the second morning of my visit, I met my host, Matt Sauer, ’16, in A.J.’s Cafe. Emphatically shutting his computer, he said that he had been up all night writing a paper that he had started after I had gone to sleep. His smile and energy persisted despite the black rings under his eyes that matched the couple of hours of sleep he had gotten. This sight—a young man as exhausted as he was enthusiastic—gave me a sense of the joy that Hillsdale’s rigorous education could bring.

The first step of education is learning that you don’t know anything. Visiting Hillsdale made me realize that not only did I not know anything, but it would be difficult to learn anything without people who were excited to share and grow together.

During my time at Hillsdale, I have learned the difference between conservatives and liberals, Platonism and Aristotelianism, Catholics and Protestants. I have become proficient in French and can tell an iamb from a trochee in a line of poetry. My visits to Hillsdale helped me to feel that I could learn these things if I spent the time and rejoiced in the strenuous work Hillsdale College demands from its students.

What inspired me then and what continues to inspire me now is the joy that permeates the life and learning of each member of the Hillsdale College community. 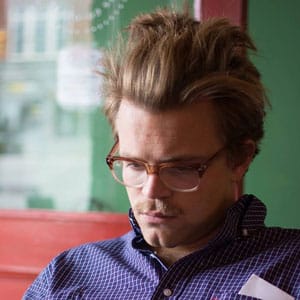 Mark Naida is a senior studying French and English. He writes for the Forum Magazine and the Hillsdale Collegian and also participates in the music and theater departments.