The Campus Job for Making Friends

Hissing steamed milk, chattering students, scraping chairs, shouted drink orders (“Two percent mocha!”), and distant, bouncing ping-pong balls. These sounds mix with the aroma of fresh coffee and set the atmosphere of the warmth and bustle of AJ’s Cafe. The average student meets up with friends, studies, and grabs a coffee or meal here. The thirty-some students who work at AJ’s throughout the week pull espresso shots, cook sandwiches, and make friends.

AJ’s student employees typically spend seven to nine hours throughout their week working in the cafe. At times the line never dies down, and one person will be manning the register, another making drinks, and a third working in the kitchen. When the customers dwindle, the restocking starts. There is rarely a dull moment. But in those moments when the restocking is done and the customers are all taken care of, there are insightful conversations to be had.

“I birthed the swear jar,” Garrison Grisedale says. “Every time I get change that’s not a quarter, I put it in there.”

Once the jar fell on student manager Anna Goodwin’s head, but she stayed good humored about it. Of course, there are good days and bad, and Anna says she appreciates being able to work in the back when she’s in a bad mood. But mostly, she appreciates the friendships she’s formed while on shift.

“I met Sarah Chavey first semester freshman year, and she has been my friend ever since,” Anna says. She and Sarah now manage the cafe with Lisa Beasley, a Bon Appetite employee. “When hiring we think of it as picking our new friends,” she says.

Working at AJ’s provides student workers with experience working the register, counting back change, and serving customers with friendliness. Employees learn to make great espresso drinks and cook up delicious sandwiches and snacks, but aside from these skills, perhaps the most lasting experience AJ’s employees share is the friendships they develop. 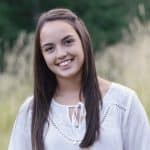 Emma McCormick, ’19, is an economics major from Coeur d’Alene, Idaho, where she loves to get outside to hike, camp, and ski. She started the Outdoor Adventures Club to try to keep that up in Hillsdale. She is the Public Relations officer of Praxis, and an RA in Olds Dorm. When she isn’t studying, or working at AJ’s, you might find her outside running.