From Harvard to Hillsdale with Dr. Kenneth Calvert

When I entered Dr. Calvert’s office, the first thing I saw—in fact, the only thing I saw from the door—was books. Books shelved floor to ceiling. Books on the desk. Books on the floor. Books open, books closed. Old books, new books, antique books. How, I wondered, had he collected them all? How had he chosen them? And how had they ended up on Hillsdale shelves, rather than those of some other college or university?

This story begins at a fork in the road. Young Dr. Calvert, fresh out of Gordon-Conwell Theological Seminary, had two passions with seemingly no overlap: comedy and early church history. Fortunately for his students (who provide Dr. Calvert with an enthusiastic audience for his jokes) and unfortunately for the comedy world, he chose to pursue the latter. Excited about the opportunity to study the New Testament under popular professor Helmut Koester, Calvert began his graduate education at the Harvard University Divinity School.

It wasn’t long before he realized that his professors didn’t share many of his fundamental religious convictions. Coming from Gordon-Conwell, where faculty members sign a statement of faith, strong disagreement over orthodox issues was a major adjustment for Calvert. “This was the first time I had really been in depth with folks who completely disagree with [evangelical Christianity],” he told me. “I was actually a little surprised they accepted me, but I was happily surprised.” Instead of shrinking from the challenge, he embraced it.

“My professors would talk in a rather condescending way toward a man named Edwin Yamauchi,” he recalled. “He’s a great scholar … but silly enough to actually believe in the resurrection of Jesus.” Undaunted—even intrigued—by his professors’ remarks, he began corresponding with Dr. Yamauchi. Their conversations yielded an unexpected result: Calvert left Harvard to study with Dr. Yamauchi.

“My professors told me that was professional suicide, intellectual suicide,” Calvert chuckled. “‘How dare you leave Harvard!’” Regardless, he packed his bags and headed away from the Ivy League to Miami University of Ohio, where, under Dr. Yamauchi’s guidance, he eventually obtained his Ph.D.

Hillsdale students can thank him for this “intellectual suicide,” because without it, they might not be taking classes from him. Many years later, when Dr. Calvert sought a professorship at Hillsdale College, his connection with Dr. Yamauchi, a well-known scholar to many of the faculty, gave him his entrée.

Between his experiences at Harvard, Miami University, and his multiple overseas research opportunities (including one to Oxford and one to the Vatican), Calvert had the chance to study under many different professors, something he says has shaped his teaching style at Hillsdale. “I want people to love history. I don’t want them to be bored to death, and I don’t want them to speak condescendingly to them.” His favorite teachers were the ones who were willing to “jump over tables” to teach their students things that they loved, enjoyed, and were excited to share. That’s the kind of professor Calvert aspired to be, and that’s exactly the kind of professor he is here at Hillsdale.

Additionally, though comedy and early church history may have seemed like conflicting careers for Calvert as a young graduate student, Hillsdale students can testify that together, they make for an entertaining class. “Dr. Calvert perfectly fits the mold of what a light-hearted professor should be,” commented Sydney Davis, ’23, a student in his Western Heritage class. “He loves to make class enjoyable by adding his own stories for extra pizzazz.”

Dr. Calvert’s journey from Harvard to Hillsdale, with everything in between, has shaped his library, his teaching, and his students. “Look at all the books in my office,” he said, when I asked him how his studies have affected his Hillsdale experience. (He didn’t have to tell me—I was already sneaking glances at the shelves while we talked.) “They all come from all of these experiences. And what I bring into the classroom reflects all of these experiences. And, you know, I am of the opinion God never wastes anything, so all of this is being used somehow.” 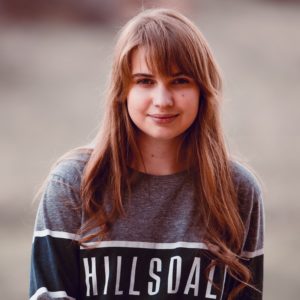 Lauren Smith, ’25, is a prospective political economy major and French minor. Outside of starting arguments in philosophy class, she enjoys curling up on a bench outdoors (sun, rain, or snow) to write novels or articles for her blog, www.laurensmythbooks.com.