The View from the Top: The Legend of Central Hall

Hillsdale is blessed with a beautiful campus, attracting thousands of visitors each year and delighting students and faculty alike. Yet no single physical piece of Hillsdale is more iconic than the Central Hall clock tower.  What alumni magazine, major-announcing Instagram post, or prospective-student tour would be complete without at least one picture of our beautiful centerpiece?

But an aspect of the clock tower remains shrouded in mystery.  For me, the glistening tower of white first transformed into a pillar of mystery as November turned gray and windy in fall 2020.  One particular day was so gusty that running from Lane to Kendall between classes left me positively wind-burned. At lunch, I met with a friend who films football practices from the top of the stadium, and he looked more winded than any running back.

With slack jaws and racing hearts, we turned to the shadowy figure who had spoken. He pushed aside his chocolate milk as he leaned over the table. This particular friend happened to be a “townie,” the affectionate name for students born and raised in Hillsdale. Since he was a townie, we venerated his knowledge of campus, and whatever he was about to tell us carried ten times more weight than anything another student could share.

“You haven’t been up there…have you?”  I asked.

“No—but there are those who have.”

“WHO?” we called in unison.At lunch, we were told the story of how the top students of each class was brought literally to the top of Central Hall each year, escorted by Dr. Arnn himself. We listened in shock and disbelief.

Later, around the pool table, we asked the townie to repeat his story to friends who had been absent at lunch. “Oh yeah, the President’s Ball king and queen get to go to the top.”

An odd change in the story, but we did not question it.

But at Sunday brunch, he said, “Oh yeah, it’s only for top donors.”

Then before class, “Only faculty can go up there.”

None of us acknowledged the change in fact pattern. Perhaps we wanted to let the legend live on; it makes cold November days a bit brighter. 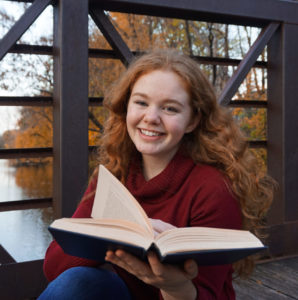 Jennifer Leonard, ’24, is a student writer for Hillsdale’s Student Stories blog and an editor at The Forum. She enjoys studying English, pressing flowers, and dreaming about writing her Great American Novel.