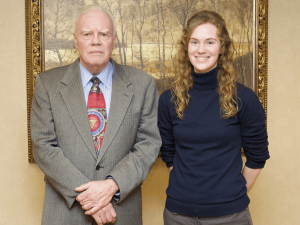 When Hillsdale donor Bob Hozian decided to fund a scholarship for art students in memory of his mother, he didn’t want it to be just any scholarship. He wanted to know the people he’d be helping out.

He was in luck.

Nearly every student at Hillsdale receives some sort of financial aid, and thanks to Hillsdale’s policy on student-donor relations, many have the unique opportunity to meet and get to know the donors who fund those scholarships.

Hozian was introduced to Hillsdale’s policy by Mark Meares in the Institutional Advancement Office. On his first trip to campus after creating the scholarship, Hozian invited his scholarship students to a Center for Constructive Alternatives reception and dinner he was attending. He always does this. He also takes them to football games and keeps in touch via email. He’s even attended several of his students’ weddings.

“I met Mr. Hozian at breakfast in Saga through a former scholarship recipient,” says senior art major Elizabeth Davis. “I was definitely nervous but excited—excited to get to know the man whose generosity funds my study of art, and nervous because I was meeting a person with whom I would have dinner twice a semester for the following two years!”

Hozian simply takes joy in his students. “I like just being with them,” he says. “I’m very proud of them. They’re kind of like daughters to me. It’s a privilege.”

The friendships that have developed over the years are a delight to his students as well.

“I have enjoyed our relationship so much,” Davis said. “I love that he introduces me to all his friends at the events we attend together and that he willingly enters in on my life here at college. We often joke that he is my source of refined culture. Through him I have gained not only a better understanding of the art of culture, but also of friendship.”

Vivian Hughbanks, ’16, is a politics and German major from Signal Mountain, Tennessee, and a member of the Dow Journalism Program. Fueled with coffee, she de-stresses by cooking and forcing food on anyone in close proximity. She tries not to get lost (and fails regularly), and occasionally jumps into lakes for no reason.