What Did You Do This Summer? Checking in with Alumni Faculty

Hillsdale College employs more than 20 alumni as professors. Few of these alumni ever imagined they would return to Hillsdale, but they occupy critical roles that create a unique learning atmosphere for students. Their work doesn’t end when students leave for the summer, however. Rather, it transitions to a different kind of contemplation and preparation.

Dr. Mark Kalthoff, ’84, returned as an instructor soon after his graduation. He is the longest-serving alumnus employed as a professor. During the upcoming school year, he will take a break from teaching to fill several administrative roles. In addition to his responsibilities as chairman of the History Department and dean of faculty, he will also serve as dean of humanities during Dr. Stephen Smith’s sabbatical. Instead of planning for his upcoming course load as he would during a typical summer, Dr. Kalthoff has been focused on those additional administrative responsibilities. Kalthoff also spent time with family in Southern California and at his cabin in Northern Michigan. He read several books, including Carl Trueman’s recent book, The Rise and Triumph of the Modern Self, which highlights the origins of the culture war. He said that Trueman’s book satisfies his interest in intellectual history.

Mrs. Sonja Bindus, ’92, heads the Early Childhood Education program and serves as director of the Mary Proctor Randall Preschool. She described the preschool as the “happiest place on campus” because it offers a special opportunity for students, adults, and children to learn together. Bindus stays in close contact with her Hillsdale friends. They even traveled to Florida together this summer. Professionally, she spent the summer adapting the preschool curriculum into a shareable format to help other schools who emulate Hillsdale’s model.

Dr. Paul Hosmer, ’99, studied physics at Hillsdale. Though originally an international business student, Hosmer fell in love with physics after taking an introductory course with Dr. James Peters, who is now his colleague. His experience as a student contributes to the way he approaches teaching his physics courses. Hosmer spent much of the summer exploring the intersection between physics and classical education. A special interest of his, he developed a course on this perspective called Teaching of Secondary Physics. He is currently writing instructional articles for teachers in the Barney Charter School Initiative about teaching physics classically.

Dr. Lee Cole, ’04, is “excited to serve” in his new role as chairman of the Philosophy and Religion Department. Though he usually measures his summer by pages read or syllabi prepared, he had a less measurable summer because he needed time to meet with outgoing department chair Dr. Thomas J. Burke Jr. to familiarize himself with his new duties. He has also spent time planning the annual departmental retreat and meeting new faculty. Cole balanced these responsibilities with ongoing home renovation projects and a family vacation to the Upper Peninsula.

Cole isn’t the only 2004 graduate teaching at Hillsdale. Dr. Dwight Lindley, ’04, teaches English. The summer break gives him more time to spend with his nine children and to catch up on his own writing projects. These projects include reviews, essays, and a book project. Lindley’s book focuses on literature as a discipline and its relationship with other disciplines. He read a few books over the summer, including The Confessions of Odysseus by Nalin Ranasing, which discusses Homer’s timeless wisdom.

Lindley shared that he always wanted to teach at a school like Hillsdale, since the small faculty-to-student ratio gives professors the opportunity to mentor students and to teach literature personally. Even though some campus buildings look different from when Lindley attended Hillsdale, he said that the close community between professors and students hasn’t changed. Hillsdale “calibrated [his] expectations of what education is and can be,” he says, so he wanted to become a professor to pass on the education he received. Lindley’s best Hillsdale memories are staying up late to talk about books and ideas, which still happens often on campus today.

Hillsdale’s faculty are truly a hallmark of its education and a gift to its students. Many of these relationships last long after a student’s four years on campus. While these professors represent just a few of Hillsdale’s many faculty, they display the caliber and character of our classroom leaders. 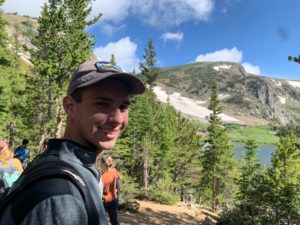 Brandt Siegfried, ’22, studies history because the Registrar won’t let him take just his favorite classes. Born and raised in Chicagoland, he prefers Hillsdale’s small-town vibes to the city hustle. On campus, he is the president of the 1844 Society and the Student Federation. Though he has never driven a boat, Brandt is the proud owner of a Michigan boating license.