Their Time to Shine: Students Rally to Save the Clocktower

“Proudly our tower and ivied walls

Point to an azure sky.”

For nearly 150 years, Hillsdale College’s iconic clocktower has risen high above the surrounding countryside pointing to an azure sky, as beautifully stated in our alma mater, “White and Blue.” But did you know there was a time when our clocktower was in danger of being lost? Thanks to the determination of Hillsdale students in 1955, coupled with the support of alumni, parents, local residents, and friends of the College, the beloved clocktower continues to stand as an enduring symbol of Hillsdale College.

In November 1955, Hillsdale’s Board of Trustees received the grim news from engineers who had surveyed the deteriorating tower: it was a “menace to life and property” and should be either torn down or restored. At minimum, reconstructing it would cost $7,500; at maximum, $10,000. But how could the College, not fully recovered from years of financial difficulty, afford this expense?

When Hillsdale students learned of this dilemma, they sprung into action. A Save the Tower Committee, headed by Ed Moran, ’58, was formed, and committee members quickly outlined a campaign with an ambitious goal: raise $10,000 for the tower. Student Federation President Bill Allinder, ’57, summed up the importance of such a lofty campaign: “It’s our chance to do something lasting for our school. The tower, in itself, means nothing—but as an enduring symbol of our school, it means everything.” Students sent 15,000 letters to alumni, county residents, and friends and parents of the College. On the evening of December 5, 1955, more than 200 students canvassed the town in a door-to-door appeal, while simultaneously, local radio station WBSE ran a 12-hour “tower marathon” to raise money. From that one evening alone, students raised $1,300.

College administrators and faculty expressed their confidence and delight in the ambitious student undertaking. “I am delighted that student leaders have demonstrated a mature constructive initiative and concern for their alma mater,” President J. Donald Phillips said in a Collegian interview. Dean of Men Dr. E. Robert Chable added, “There is no question in my mind about the ability of our students to accomplish anything they set out to do.”

Donations continued to pour in over the next weeks and months from the letter campaign. Two local theaters donated the proceeds from one night toward the campaign as well. Ultimately, the Save the Tower campaign raised $8,000. On December 14, 1955, in conjunction with the Detroit Free Press, the Save the Tower Committee sponsored a lecture by “Peanuts” cartoonist Charles M. Schultz at Hillsdale High School as a way to thank local residents for their support.

On January 26, 1956, Central Hall’s bell, weighing 2,551 pounds, was removed from the tower, and construction crews worked over the next months to rebuild and strengthen the tower. Spirited debate about what to do with the bell ensued immediately. Many argued that the bell, estimated to be worth $1,000, should be sold to help pay for the tower reconstruction costs. But others believed it should be preserved as a part of College history. Ultimately, sentimentality prevailed, and the Class of 1957 had the bell mounted outside of Central Hall as its class gift. 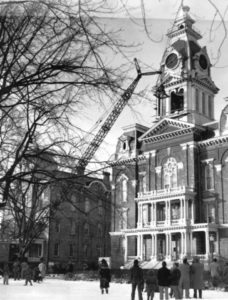 The Collegian staff editorial in the December 8, 1955, issue reflected on the larger meaning of the Save the Tower campaign: “Many people learned the real meaning of unselfish cooperation with the last week…working for little or no credit…striving for something that is symbolic rather than material…and working in unity to achieve unity, through this symbol which can hold a college together.” Now, 65 years later, we are continually grateful for the foresight and thoughtfulness of those Hillsdale students who put forth their finest hour to Save the Tower.

Read more from the January Newsletter:

The Heartbeat of the Community: Jeremiah Hodshire Leads Hillsdale Hospital