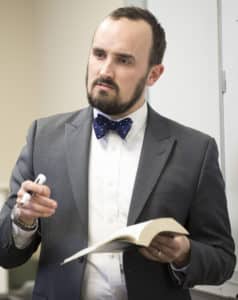 Associate Professor of English Dwight Lindley believes that Paradise Lost, written by 17th century poet John Milton, is one of the few great epics of all time—ranking just behind Homer, Virgil, and Dante—and the greatest epic in the English language. Lindley defines an epic as “a poem that deals with the time and really the civilization for which it’s written, but is also timeless, transcends that civilization, and says something about the good life, the meaning of life for humankind.”

Looking beyond the category of epic, Lindley adds that Paradise Lost contains some of the best poetry written in the English language. “I think it’s second only to Shakespeare, in the sustained quality of its poetry just considered as verse,” Lindley says.

The themes of Paradise Lost are also extremely relevant to today’s student. “Paradise Lost is about the problem of theodicy, this search for God in a world that is marked by evil, and how we can understand God in this fallen world,” Lindley says. “That’s the question of the poem. It begins with the famous lines that the poet is here to assert eternal Providence and justify the ways of God to men. And that is a problem that everyone is interested in, and that is particularly elusive in the modern world.”

Download a (PDF format) Paradise Lost poster for use in your classroom.