Life and Love in Much Ado About Nothing 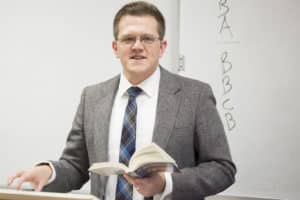 Great plays reveal something universally true about the human experience. As Assistant Professor of English Dr. Benedict Whalen says, Shakespeare’s Much Ado About Nothing falls into this category. The play exceptionally portrays different aspects of life, from the lighthearted to the serious and suffering.

As Dr. Whalen pointed out, one couple in the play, Benedick and Beatrice, exemplifies the “comedy of the battle between the sexes, the comedy of falling in love” through their “witty, biting, but also loving exchanges.” The story of the other pair of lovers, Hero and Claudio, is set next to Benedick and Beatrice’s as having greater tragic potential. Hero and Claudio’s love is almost destroyed through Don John’s manipulations and their subsequent falling-out. “The play’s a really excellent one because it has all of this delightful comedy of love, while also instructing in some of these more dangerous pitfalls and excesses that the passions might expose one to,” Dr. Whalen said.

The play’s balanced treatment of life also shines through in its character Dogberry, who, despite his ignorance and simplicity, plays an important part in the story. “Where all the more sophisticated, intellectual characters are lost in passions and fights, Dogberry’s honesty, goodness, and devotion to the right is what allows for the resolution of the whole conflict of the play,” Dr. Whalen said.