Alumni Find Hillsdale College Campus a Place of Calm Among Storm, Then and Now

Hillsdale College hosted its 50- & 60- Year Reunion from April 14-16, inviting back all members of the graduating classes of 1960, 1961, 1970, and 1971. Many attendees returned to a campus much changed from how it looked in the mid-20th century, and some still call the Hillsdale area home, continuing to make an impact here and in surrounding communities.

Sue Hayes, Class of 1961, graduated with a degree in religion and philosophy, with English and history minors, and went on to teach English in Hillsdale Community Schools for 24 years. 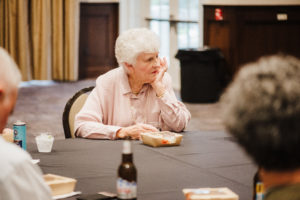 Sue Hayes at the reunion in April.

“In those days, you walked out of college, and you had no trouble getting a job,” Hayes said. “There were just lots and lots of jobs available. Life was much easier then, I think.”

Hayes attended the 50- & 60-Year Reunion with a close friend and sorority sister who now lives in the Detroit area. “We stayed on campus at the Dow, and we went to every event,” she said. Some of those events included the Mary Waterman Memorial Organ dedication and concert, spring convocation, tours of the Fine Arts Building and Halter Shooting Sports Center, many meals together, and a visit to the Pi Beta Phi house.

Hayes’s husband, a Hillsdale native and Hillsdale College graduate, earned his law degree at University of Michigan before settling back down in his hometown with Hayes, who has remained involved in community and College life. She is active in Hillsdale College Women Commissioners, which she presided over in 1987 and 1988, and credits her time at the College for building her confidence as a leader.

“Hillsdale College was such a wonderful place to grow and to become who you are, because it was small enough that I was on the newspaper staff; I was in the Student Federation; I had an office in the sorority,” she said. “You gain a lot of self-confidence doing those things. If you go to a big school, you’re not on the school paper unless you’re a journalism major.”

Hayes said she enjoyed every moment of the 50- & 60-Year Reunion and only regretted that more alumni couldn’t attend. There were 9 others in attendance from her class, and she knew them all.

Alumnus Zach Kanaan from Clark Lake, Michigan, also attended the reunion with his wife and said there were five or six people from his graduating Class of 1971 who attended the event whom he knew.

Both Hayes and Kanaan talked about attending the College in a particularly tumultuous period, Hayes having attended shortly after the1955 Tangerine Bowl incident, and Kanaan playing for the same team 12 years later, though he recalled a calm that the campus provided in a time of upheaval.

“Those years were a really interesting period of our history because that’s when Civil Rights, Women’s Rights, the Vietnam War…there was a lot going on, and Detroit was burning.” Kanaan said he went to pick up a friend from the airport and could actually see the flames. “Hillsdale was for us a safe place, a calm place in all the turmoil of the world. It was a place where you could still function normally for the most part, which still seems to be the case today.”

Kanaan credits the school’s philosophy and founding values for its ability to weather the storm. “The College has stayed true to who it is, stayed true to its values and its morals,” he said. “When you do that, you can function okay, and you don’t get caught up in all the craziness.”

Kanaan came to the College on a football scholarship from Pennsylvania but said that football was just a tool to get a great education. He graduated with an education degree and has dedicated his life to educating others, a field he deems of highest import.

“Being in education affords you the opportunity to be part of thousands of peoples’ lives and to be a positive impact in those lives,” he said.

Directly out of college, Kanaan taught fourth graders in Jonesville, then he taught in the Brooklyn area, and eventually in Detroit, where he has worked to help develop charter schools. He said he is happy he stayed in southern Michigan. He has come back to Hillsdale College to attend homecomings and a few other events but has been more involved in the Clark Lake Area, where he still works with children and adults, teaching them to always find the good.

“Sometimes what you think is the worst thing in your life ends up being one of the best,” he said. When he looks back on his time at Hillsdale College, Kanaan remembers initially being homesick from the five-hour drive. But it didn’t take him long to settle in.

“I arrived here when I was 17 and graduated when I was 21,” he said. “In that little block of time, you grow up and develop a lot, and Hillsdale was a great place to do that. The College has continued to be good for me throughout my life, and that is priceless.”

The campus might look different now for both Hayes and Kanaan. Only a few buildings remain from their eras, but the fact that those few buildings do remain, especially Central Hall, is meaningful to both alumni.

“It’s a testament to how the school maintains its integrity and belief system,” Kanaan said. “No matter what year you graduated, everyone knows Central Hall. That’s like the rock that will never go away. We all need to know that there are things out there that last and won’t go away. Hillsdale College gives that feeling to people. There is still goodness; there is still is fairness; there are opportunities. That’s what this place reflects, and it benefits everybody who takes it in.” 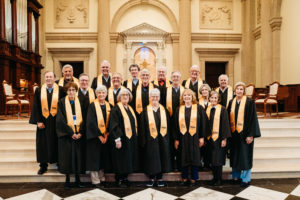 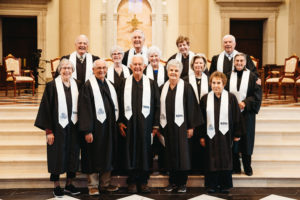 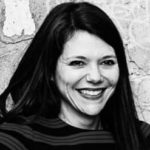