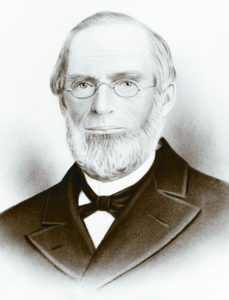 Professor. Preacher. President. Fundraiser. Perhaps no single person did more to establish Hillsdale College than Ransom Dunn, the “Grand Old Man” who wore many hats over the course of his five decades of service to the College. As we celebrate the 176th anniversary of Hillsdale’s founding this month, it’s fitting to take a look at one of Hillsdale’s most influential leaders, a man whose vision still guides the College today.

Ransom Dunn, who became a licensed minister at the tender age of 16, left his native Vermont just two years later, restless for adventure and evangelism on the western frontier. “A cry was in my ears from the West….To that land, and even beyond to the cabins of the wilderness, I hasten with delight,” he said.

Dunn joined the faculty of Michigan Central College in 1852 as a professor of moral philosophy. The young college had already outgrown its meager facilities and resources, and Dunn led the charge in convincing the faculty and trustees that the school must relocate from Spring Arbor. On his own initiative, Dunn stopped in Hillsdale on a snowy January evening in 1853. After a local physician rounded up 20 citizens interested in education, Dunn addressed them about his vision for the College, one that would not discriminate on the basis of sex, color, or creed. Furthermore, he advocated for a college that would shape not only the minds, but also the hearts of its students. In just 40 minutes, Dunn convinced the Hillsdale citizens to accept the relocation of Michigan Central College to Hillsdale.

Dunn immediately got to work raising money toward building a campus in Hillsdale. He traveled throughout the Midwest over the next two years, speaking to groups and soliciting donations for the College. A brief note summarizes his incredible accomplishment: “Began work in Sept. 1853 to opening of College in 1855. Traveled 6,000 miles by carriage. Was sent after $10,000. Secured.” In reality, Dunn secured a whopping $22,000 in donations!

Over the course of his long career at the College, Dunn taught as many as 13 subjects, served as a College trustee and as pastor of College Baptist Church at various times, and even served as interim president. A dynamic speaker and tireless advocate for Hillsdale’s educational mission, he spoke to a crowd of 5,000 gathered for the laying of the Central Hall cornerstone on August 18, 1874: “Intellectual power alone, without conscience, is of little comparative value to the world. The mission of this school is…to make better men, better lawyers, better ministers, and better members of society generally.”

In 1898, Dunn retired at the age of 80 due to declining health. College trustees recognized his incomparable contributions to the College at that spring’s Commencement: “…to his energy and enthusiasm in its early days are due [the College’s] origin and growth more than to any other man.” Two years later, Dunn passed away, leaving not only a personal legacy (five of his children and nine of his grandchildren graduated from Hillsdale), but also an enduring imprint on the mission of Hillsdale, a steadfast mission now 176 years strong.

We are grateful for the vision of Ransom Dunn in establishing our truly unique College. As he wrote in a Hillsdale yearbook shortly before his retirement, “The real value of colleges and universities is not to be estimated by the magnitude of buildings or endowments, but by the increase of mental power and moral force.”